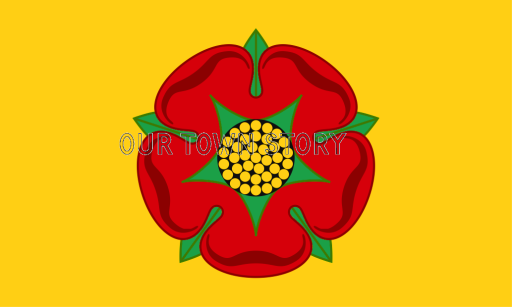 
Lancashire (archaically the County Palatine of Lancaster; abbreviated Lancs.) is a county in the north west of England. Although Lancaster is still considered to be the county town, the county's administrative centre is Preston. It has a population of 1,449,300 and an area of 1,189 square miles (3,080 km2). People from the county are known as Lancastrians.

The history of Lancashire is thought to have begun with its founding in the 12th century. In the Domesday Book (1086), some of its lands had been treated as part of Yorkshire. The land that lay Inter Ripam et Mersam, "between the Ribble and Mersey", formed part of the returns for Cheshire. Once its initial boundaries were established, it bordered Cumberland, Westmorland, Yorkshire and Cheshire.

Lancashire emerged during the Industrial Revolution as a major commercial and industrial region. Manchester and Liverpool grew quickly as its largest cities, both dominating global trade and the birth of modern capitalism. The county encompassed several hundred mill towns and collieries. By the 1830s, approximately 85% of all cotton manufactured worldwide was processed in Lancashire.

The county was subject to a significant boundary reform in 1974, which removed Liverpool and Manchester with most of their surrounding conurbations to form part of the metropolitan counties of Merseyside and Greater Manchester respectively. Additionally, the detached northern part of Lancashire in the Lake District, including the Furness Peninsula and Cartmel, was merged with Cumberland and Westmorland to form Cumbria.

In total, Lancashire lost 709 square miles of land to other counties, about two fifths of its original area. Today it borders Cumbria to the north, Greater Manchester and Merseyside to the south and North and West Yorkshire to the east, with the county having a coastline on the Irish Sea to the west. The Duchy of Lancaster exercises the right of the Crown within the historic boundaries of Lancashire.